(Bloomberg) -- Singapore’s closure of bars and entertainment venues to contain the spread of coronavirus is another gut punch to the city-state’s economy already suffering from widespread disruptions to trade and tourism.

Authorities are scrambling to curb the spread of the virus after a recent spike in confirmed virus cases, now at more than 550, mainly from residents returning from overseas trips. For Singapore’s small open economy, the new restrictions will hurt consumer spending and push the nation closer to a recession.

“Tourism demand is already gone.This will rub salt into the wound of the entertainment industry given that the latest set of measures will erase domestic demand, which has already been weakened due to the outbreak,” said Irvin Seah, senior economist at DBS Group Holdings Ltd. in Singapore.

Although necessary to contain the spread of the virus, “every additional set of restrictive measures will add more pain on the economy,” he said.

Deputy Prime Minister Heng Swee Keat is set to unveil a second package of virus-related measures in Parliament on Thursday, just over a month after he delivered S$6.4 billion ($4.4 billion) in support for healthcare, businesses and households in the annual budget. The central bank has also brought forward its policy decision to March 30, with analysts expecting it to ease policy.

Seah said his team is sticking to a forecast for a 0.5% contraction in gross domestic product this year, while warning of “significant downside risks” to that figure if the outbreak worsens.

The government’s latest projection, published in February, was for growth of around 0.5%, the midpoint of its forecast range. That’s likely to be revised Thursday with the release of advance first-quarter growth figures. GDP probably contracted an annualised 7.2% this quarter, according to the median estimate in a Bloomberg survey of eight economists.

“Hopefully tomorrow’s announcement of a sizable second stimulus package can help mitigate some of the downside risks, particularly to bolster consumer confidence, assist liquidity and short term survival of companies -- especially SMEs -- and enhance job and income security of displaced workers, including self-employed and gig workers,” said Selena Ling, head of research and strategy at Oversea-Chinese Banking Corp. in Singapore.

Monday’s tally of 54 new cases was the biggest single-day total for the city-state. It indicates the outbreak has entered a second wave in Singapore, as it has in many countries that had seen infections level off in recent weeks.

“Even the billion-dollar private tuition industry in Singapore is not as recession-proof as initially thought,” she said.

Last Call
Ling recently downgraded her forecast for Singapore’s economic growth this year to a range of -1% to 0%, with both manufacturing and services sectors likely to contract. Further suspensions of economic activity would heighten the risk of a technical recession, she said.

The government moved Tuesday evening to shutter bars, cinemas, and entertainment venues, with the new regulations to be enforced as of 11:59 p.m. Thursday. While officials so far have resisted imposing widespread lockdowns, the latest measures are the strictest yet and include limiting gatherings outside work or school to a maximum 10 people, the Ministry of Health said in a statement. The measures will remain in place until at least April 30, it said.

The economic data for 2020 already look much darker to Edward Teather, senior Asean economist at UBS Group AG in Singapore. He expects Singapore’s economy to contract 7% this year. 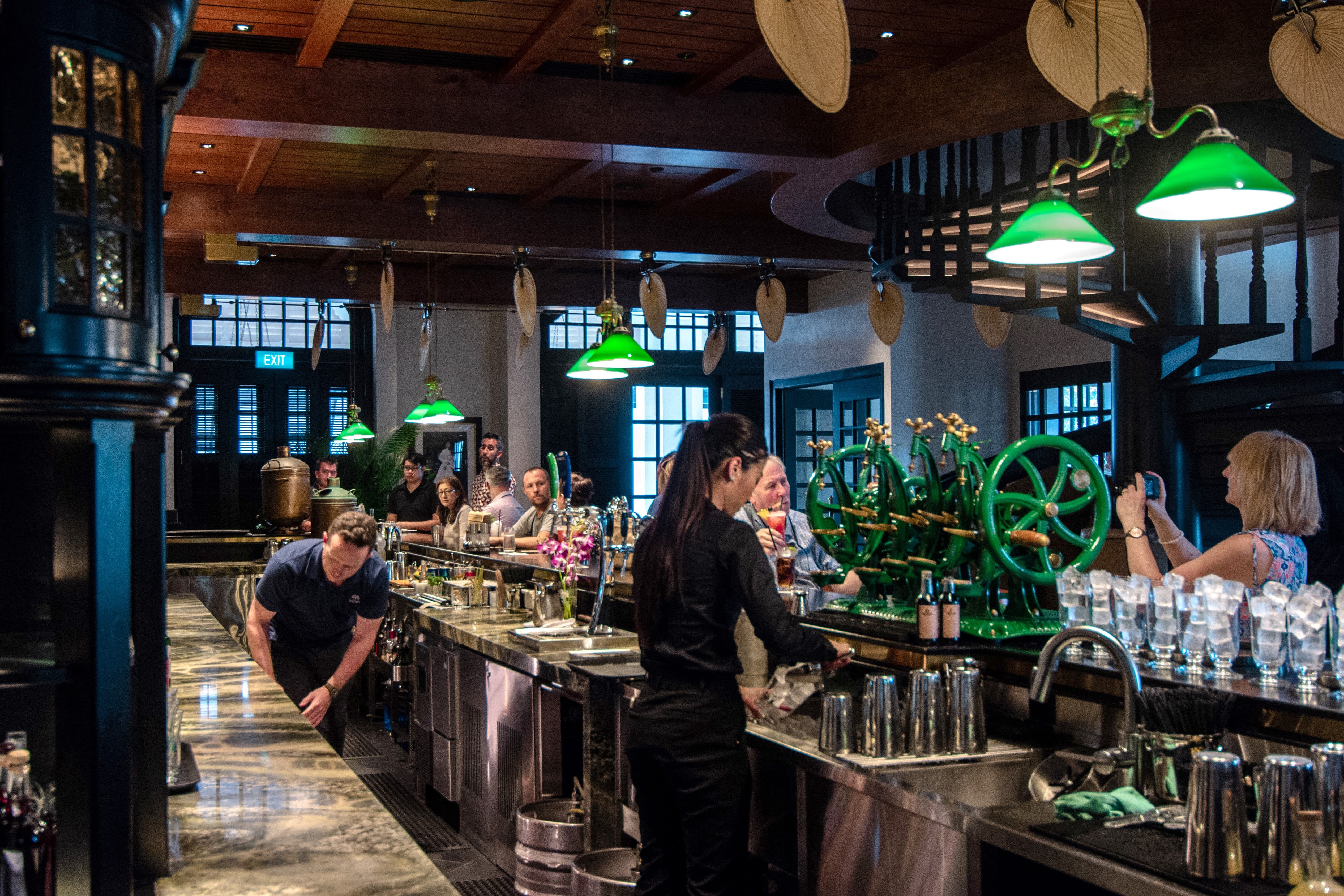 Singapore’s closure of bars and entertainment venues to contain the spread of coronavirus is another gut punch to the city-state’s economy.